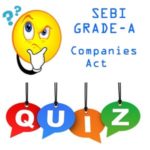 Answer: (4)
The Chapter III of Companies Act 2013 is related to Prospectus and Allotment of Securities

Answer: (3)
The Companies Act, 2013 passed by the Parliament has received the assent of the President of India on 29th August, 2013.

Q5. Which among the following securities need not to be issued through prospectus?

Answer: (2)
A Private Company needs not to issue prospectus

Q7. Who has the power to regulate issue and transfer of securities?

Answer: (4)
Issue and transfer of securities and non-payment of dividend by listed companies or those companies which intend to get their securities listed on any recognised stock exchange in India be administered by the Securities and Exchange Board of India.

Q8. Every prospectus issued by a public company should contain reports related to profits and losses for immediately ________ preceding financial years.

Answer: (4)
No prospectus shall be valid if it is issued more than ninety days after the date on which a copy thereof is delivered to the Registrar of Companies (RoC)

Q10. What is the minimum fine that can be imposed on a company if a prospectus is issued in contravention of the provisions Section 26 of Companies Act 2013?

Answer: (1)
If a prospectus is issued in contravention of the provisions of section 26 of Companies Act 2013, the company shall be punishable with fine which shall not be less than fifty thousand rupees

You must also read following MCQs:

Click to go to SEBI Grade A Preparation Page