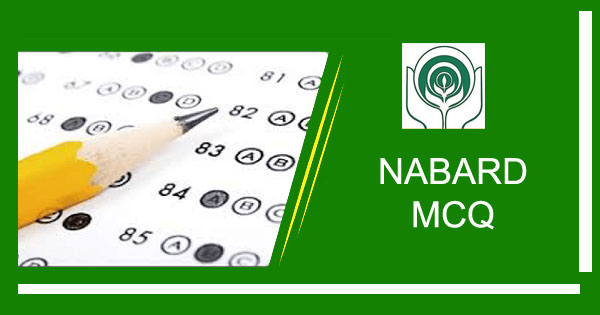 Dear aspirants,
We are presenting you the ESI ARD MCQ Part 1 for NABARD Grade A exam. The answer are given after every question.

Q1. What is the target set by government for Production of food grains for the crop year 2021-22?

Q3. Which ministry is responsible for implementing the Members of Parliament Local Area Development Scheme (MPLADS)?

Answer: (2)
The Ministry of Statistics and Programme Implementation has been responsible for the provision of guidelines, release of funds and prescribing monitoring mechanism for implementation of the Scheme. The government has allowed utilisation of Members of Parliament Local Area Development Scheme (MPLADS) funds to set up oxygen manufacturing plants in government hospitals/dispensaries as a one-time measure till the end of FY22

Q4. Which country has become top destination of FDI in 2020 as per OECD data?

Answer: (3)
Global foreign direct investment flows ebbed to a 15-year low last year and China, one of the few major economies to eke out growth, overtook the United States as the top destination, OECD data showed. As the coronavirus wreaked havoc on the global economy, global FDI flows dropped 38% in 2020 to $846 billion, the lowest level since 2005.

Q5. Which among the following is a high-yielding and pest-resistant variety of soybean recently developed by Indian Scientists?

Answer: (1)
Recently, Indian Scientists have developed a high-yielding and pest-resistant variety of soybean, called MACS 1407. Scientists from MACS- Agharkar Research Institute, Pune, in collaboration with Indian Council of Agricultural Research, New Delhi have developed it. It gives 39 quintals per hectare making it a high yielding variety. It requires an average 43 days for 50% flowering and takes 104 days to mature from the date of sowing. In 2019, India produced around 90 million tons of soybean

Q6. Under Scheme of Financial Assistance to States for Capital Expenditure, the government has decided to provide an additional amount of upto _____ to States

Answer: (4)
The Ministry of Finance, Government of India has decided to provide an additional amount of upto Rs 15,000 crore to States as interest free 50 year loan for spending on capital projects. The first part of scheme is for North-east and hill states and an amount of Rs 2,600 crore has been earmarked. The second part of scheme is for all other states with an amount of Rs 7,400 crore. This amount has been allocated among states in proportion to their share of central taxes as per the award of 15th Finance Commission for 2021-22. The third part of scheme is for providing incentives to states for monetisation or recycling of infrastructure assets and disinvestment of state public sector enterprises. An amount of Rs 5,000 crore is allocated.

Q7. How many people rely on forests as per Global Forest Goals Report, 2021?

Answer: (2)
According to the United Nations’ Global Forest Goals Report 2021, an estimated 1.6 billion people, or 25% of the global population, rely on forests for their subsistence needs, livelihoods, employment, and income. The Report has been prepared by the Department of Economic and Social Affairs of the United Nations

Q8. What is the target set by government for road construction in next two years?

Answer: (3)
The government is giving utmost priority to the development of infrastructure and has set a target of road construction worth Rs 15 lakh crore in the next two years. It will achieve target of 40 kilometres per day of highways construction in current fiscal. The government is permitting 100 per FDI (Foreign Direct Investment) in road sector

Q9. What is the objective of Operation Samudra Setu II launched recently?

Q10. Who has recently been appointed as Deputy Governor of RBI?

Answer: (4)
The Government of India recently appointed T Rabi Shankar as the fourth Deputy Governor. About T Rabi Shankar T Rabi Shankar is in charge of fintech, payment system, risk management and information technology at the Apex Bank. He has succeeded B P Kanungo.