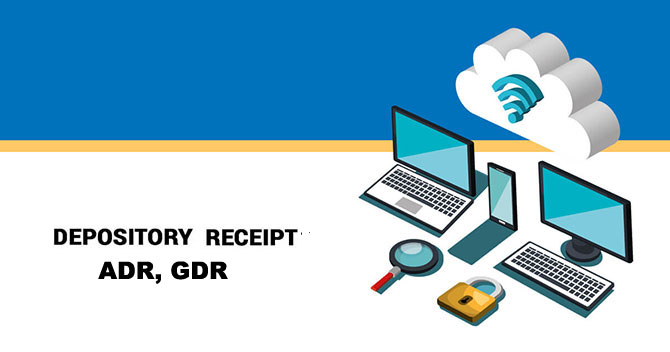 A depository receipt (DR) is a negotiable certificate denominated in US dollars. It represents a non-US company’s publicly traded, local currency (Indian Rupee) shares. Depository receipts are created when the local currency shares of a Domestic Company are delivered to the depository’s local custodian bank, against which the depository bank issues DRs in US dollars.  These DRs may trade freely in the overseas markets like any other dollar denominated security, either on a stock exchange or in the over-the-counter market or among a restricted group such as Qualified Institutional Buyers (QIB). Dividend payments are made by the company in rupees which the depository converts into dollars and pays to the investor after deducting the withholding tax

ADR’s are depository receipts issued in United States of America (USA) in accordance with the provisions of Securities and Exchange Commission. Listing provisions in USA are very stringent. Issue of ADR is costlier. ADRs are US dollar denominated negotiable instruments issued in the US by a depository bank, representing ownership in non-US securities. ADRs can be listed on New York Stock Exchange, American Stock Exchange or NASDAQ. Depository receipts permit investors to trade in foreign securities and at the same time giving the issuing companies an access to major international markets

GDRs are traded and settled outside the United States. Rule 144A of the Securities and Exchange Commission (SEC) of U.S.A., however, permits the companies from outside USA to offer their GDRs to Qualified Institutional Buyers (QIB). Global Depository Receipt is in the nature of a depository receipt or certificate created by an overseas depository bank (authorised by the issuing company) outside India and is issued to non-resident investors against the issue of FCCB’s or shares of the issuer company. It is a negotiable certificate in US dollars, and traded freely in foreign markets like other securities and can be issued by way of private placement also. Prior permission of Ministry of Finance, Government of India, is required for issue of GDRs.

How Depository Receipt issued in India?