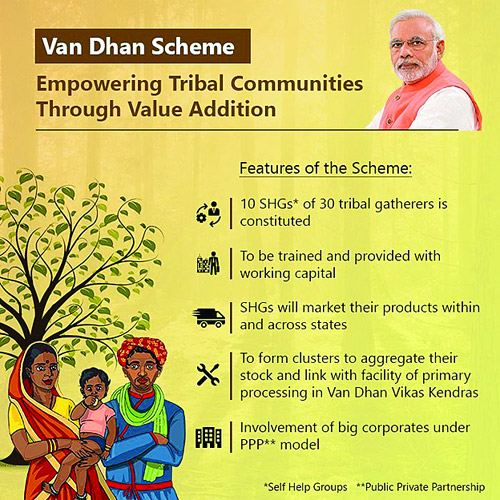 Pradhan Mantri Van Dhan Yojana of Ministry of Tribal Affairs and TRIFED was launched on 14th April, 2018 during the celebrations of Ambedkar Jayanti at Bijapur, Chattisgarh.  The programme aims to tap the traditional knowledge and skills of tribals and add branding, packaging and marketing skills to optimize their income through a market led enterprise model by setting up of Van Dhan Kendras (VDVKs)”. It is a retail marketing led value addition plan for Minor Forest Produce (MFP), meant for forest-based tribes to optimize the tribal income, locally

TRIFOOD are the food processing parks that are being set up under the joint initiative of TRIFED, the Ministry of Tribal Affairs, and the Ministry of the food processing industry. The TRIFOOD Parks will procure raw materials from Van Dhan Kendras. Then they will be processed and sold across the country through the tribes India outlets.The agreement for setting up 5 TRIFOOD parks was signed between TRIFED Managing Director Pravir Krishna and Akhil Bhartiya Vanvasi Ashram General Secretary Yogesh Bapat.

Progress under the scheme

1205 Tribal Enterprises have been established to provide employment opportunities to 3.6 lakh tribal gatherers and 18000 Self-help groups in 22 States

We hope you liked this article. Here are some useful government schemes for you to read next: