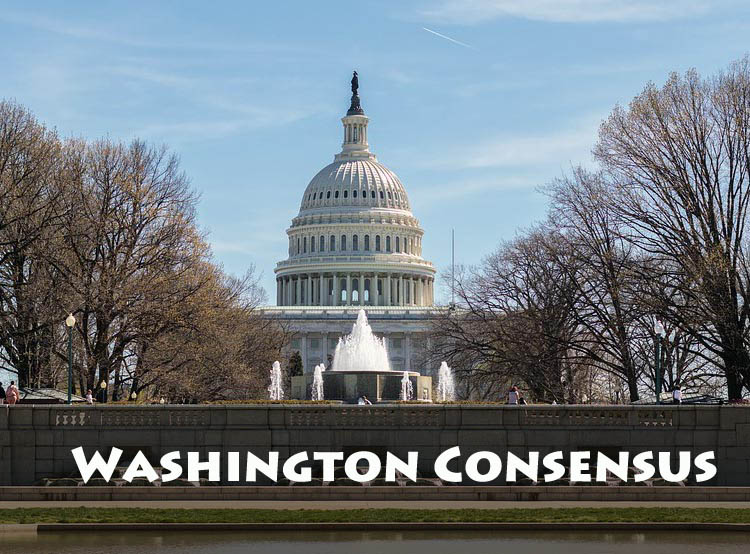 Washington Consensus was coined by John Williamson in 1989 to refer to the policy advice given by the Washington-based institutions such as IMF, World Bank, US treasury, to latin American Countries. The theory of development promoted by the Washington consensus, also called neo-liberalism, argued globalization would promote both rapid growth as well as convergence in the world economy

The name ‘Washington Consensus’ is derived from the fact that three institutions which have together played a key role in the making of Globalization – the IMF, the World Bank, and the US Treasury Department – are all headquartered in Washington

The ten point principles originally set out by John Williamson in 1989 were:

These policies were deemed necessary to achieve growth, low inflation, a viable balance of payments, and equitable income distribution in the developing world at large, and especially in Latin America, which was still recovering from the debt crisis that erupted in 1982.

The prescription to stabilize, privatize, and liberalize had gained traction among many policymakers in developing countries since the 1980s as import substitution and interventionist policies had led to bloated bureaucracies, grossly inefficient state-owned enterprises, unsustainable public indebtedness, inflation, and slow or even negative growth.

India was coerced into adopting the path of the Washington Consensus when it turned to the International Monetary Fund (IMF) for support because its foreign exchange reserves had become precariously low. India had to open its economy for more imports and more investments by foreigner

We hope you liked this article on Washington Consensus. Here are some useful articles for you to read next: