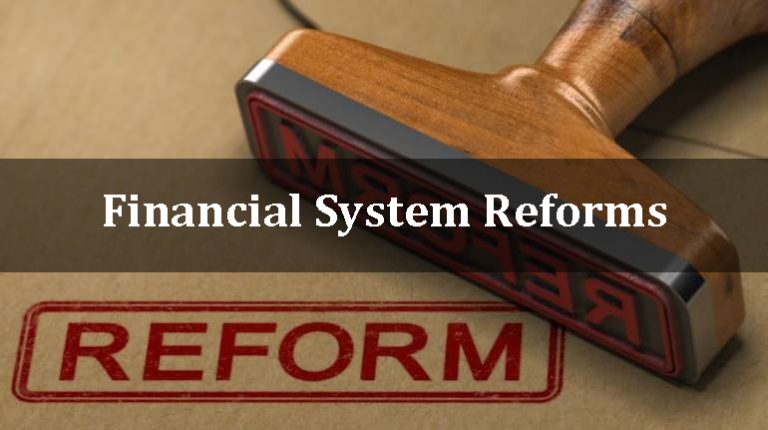 India adopted state-controlled development strategy after attaining independence. The allocation of resources was made by government. In this type of controlled environment, the role of financial system was limited.

The government failed to achieve higher economic growth. The government was neither able to generate resources for investment or creating public services nor able to arouse public interest in savings.

Till 1990s, the Indian financial system was closed, restrictive, highly regulated and segmented. The resource allocation was not efficient. The financial system was characterized by administered interest rates, complex regulation and restrictions on securities market, high statutory reserve requirements, strong entry barriers for new entrants. This led to low level of competition, efficiency and productivity

There was need for market led strategy of development to improve allocative and operational efficiency of financial system. The major economic reforms in India were initiated in 1991.

The major aim of the reforms in the early phase of reforms was to create an efficient, productive and profitable financial service industry operating within the environment of operating flexibility and functional autonomy. The focus of the next phase of financial sector reforms was the strengthening of the financial system and introduction of structural improvements.

The major objectives of financial system reforms were:

The financial system reforms can be broadly classified into three categories:

Watch this article as video

The interest rate on saving deposits were quite low and controlled. There was no incentive for public to inculcate the habit of savings. There was high level of statutory and cash reserve requirements needed to be met by banks, therefore large portion of funds available with banks were pre-empted by government.

The banks were nationalised in 1969 and 1980. The objective was to was to extend the reach of organised banking services to rural areas and to the neglected sections/sectors of society. By 1990s, the Indian banking system became predominantly government owned. However, the operational efficiency was unsatisfactory. Banks were characterised by low profitability with high and growing non-performing assets.

The important reforms taken up in banking sector were:

Capital market refers to the market for long-term funds for investment purposes.  The capital market comprises of two segments – the primary and the secondary markets. The companies, corporates and government bodies raise funds from capital market for their long-term productive use. The instruments like bonds, equity shares are traded in this market.

Till 1990s, the primary capital market was controlled by government. There was no price discovery mechanism.

The important reforms taken up in capital market were:

Traditionally Indian forex exchange market had been heavily controlled to foster import substitution policy. Therefore, both the current and capital accounts were closed. There was complex licensing system operated by Reserve Bank of India to operate foreign exchange.

The prominent reforms were: