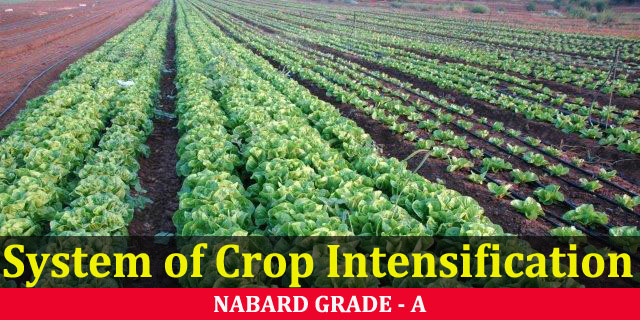 The System of Crop Intensification (SCI) refers to an increase in agricultural production per unit of inputs. The input includes labour, land, time, fertilizer, seed, feed or cash. The aim is to achieve higher output with less use of or less expenditure on land, labor, capital, and water. Crop intensification technique includes intercropping, relay cropping, sequential cropping, ratoon cropping, etc

Need of System of Crop Intensification

The practice of intensification of crop in time and space dimensions is referred as Multiple Cropping.

The multiple cropping is furthered categorized into:

The practice of growing two or more crops simultaneously on the same field is called intercropping. This type of system of crop intensification is in both time and space dimensions.

The intercropping is further classified into following types:

The practice of growing two or more crops in sequence on the same field in a farming year is known as Sequential Cropping. The succeeding crop is planted after the preceding crop has been harvested. Crop intensification is only in time dimension. Thus, there is no intercrop competition.

Sequential Cropping is further classified into: