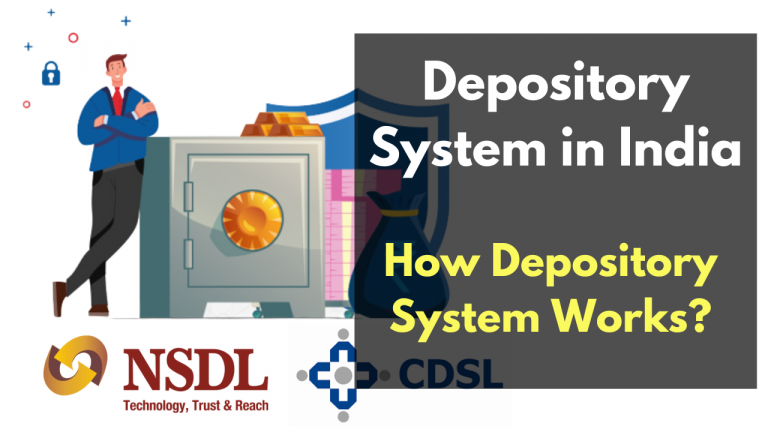 Prior to the introduction of Depository System in India, the companies used to issue physical share certificates. The Indian share market followed open outcry system, where investors buy and sell shares physically. The physical share certificates represent the shares’ ownership in a company. This system was also known as Scrip-based Trading System.

In Depository System, the securities of investors are held in the electronic form with the depository. Since this system dispenses the movement of securities in physical form, therefore it is also called Scripless Trading System. It makes the financial market more systematic and disciplined.

What is Depository System?

A Demat account is like a bank account that shows the securities holding of an investor. It holds securities of investors in digital form. An investor can open Demat account with depository through depository participant. SEBI has made it mandatory for all the public limited companies to have their securities in demat mode only.

Dematerialisation is the process by which physical certificates of securities of an investor are converted to an equivalent number of securities in electronic form.

Rematerialization is the process of converting securities held in electronic form in a demat account back in physical certificate form.

The prominent functions of depository system are:

There are five parties involved in Depository System:

The Depository is an institution which maintains an electronic record of ownership of securities. It is company that has been formed and registered under the Indian Companies Act, 2013 & has been granted a certificate of registration by SEBI, subsequent to registration under the Depositories Act, 1996. It is an institution alike bank for securities where the dematerialized physical securities are traded and held in custody. Thus, depository is a custodian of its client’s securities.  It interfaces with its investors through its agents called depository participants.

The legal ownership of securities is with depository, but the beneficial ownership is with investor. The depository name is registered in the ownership register maintained by the company. Thus, instead of name of several owners, the name of depository figures in the register of company.

The following entities can register themselves as depository participant with SEBI:

The investor whose securities are held in electronic form in a demat account opened with a depository through a Depository Participant is called as ‘Beneficial Owner’ (BO). All the benefits as a result of the holding the securities are given to such beneficial owner.

The Government of India enacted the Depositories Act 1996 to start depository services in India. According to this act, the Depository means:

The important advantages of depository system are:

Depositories in India – NSDL vs CSDL

In India, a depository has to be promoted as a corporate body under Companies Act, 1956. It is also to be Registered as a depository with SEBI. The minimum net worth stipulated by SEBI to operate as depository is Rs.100 crores. There are two SEBI registered depositories in India:

Following services are provided by a depository to the investors through its depository participant:

FAQ on Depository System in India